What are Essential Oils?

Sometimes called the “life force” of a plant, therapeutic grade essential oils are very complex. They are stored in special cells, ducts or glandular hairs that are distributed among the flowers, leaves, bark, stems and roots of a plant. These oils protect the plant from insects and other herbivores, from bacteria, molds, fungi and other micro-organisms. They also help to heal inflicted wounds. These unique characteristics make essential oils highly beneficial to humans. A single oil may contain hundreds of constituents that are molecularly aligned in exactly the right manner to trigger a number of responses in the human body. Essential oils are used by chiropractors, aromatherapists, reflexologists, massage therapists and others interested in alternatives to prescription drugs.

It is the use of therapeutic-grade essential oils to affect mood and promote vitality. Some people buy various essential oils but rarely use them because they don’t know how. This website will help change that by giving some examples of the various ways essential oils can be used. In the past, you had to pull out a book or ask friends. Now you can use our basic search to assist you. Chances are good that others have experienced the same types of situations that you have.

The Chinese may have been one of the first cultures to use aromatic plants for well-being. Their practices involved burning incense to help create harmony and balance.

Oils of cedarwood, clove, cinnamon, nutmeg and myrrh were used by the Egyptians to embalm the dead. When a tomb was opened in the early 20th century, traces of the herbs were discovered with intact portions of the body. The scent, although faint, was still apparent. Although the cedarwood the Egyptians used was distilled by a crude distillation process, the other oils the Egyptians used were most likely infused oils.

The Egyptians also used infused oils and herbal preparations for spiritual, medicinal, fragrant and cosmetic use. It is thought that the Egyptians coined the term perfume, from the Latin per fumum which translates as through the smoke. Egyptian men of the time used fragrance as readily as the women. An interesting method that the men used to fragrance themselves was to place a solid cone of perfume on their heads. It would gradually melt and would cover them in fragrance.

Greek Amphora for PerfumeThe Greeks learned a great deal from the Egyptians, but Greek mythology apparently credits the gift and knowledge of perfumes to the gods. The Greeks also recognized the medicinal and aromatic benefits of plants. Hippocrates, commonly called the “father of medicine” practiced fumigations for both aromatic and medicinal benefit. A Greek perfumer by the name of Megallus created a perfume called megaleion. Megaleion included myrrh in a fatty-oil base and served several purposes: (1) for its aroma, (2) for its anti-inflammatory properties towards the skin and (3) to heal wounds.

The Roman Empire built upon the knowledge of the Egyptians and Greeks. Discorides wrote a book called De Materia Medica that described the properties of approximately 500 plants. It is also reported that Discorides studied distillation. Distillation during this period, however, focused on extracting aromatic floral waters and not essential oils.

A major event for the distillation of essential oils came with the invention of a coiled cooling pipe in the 11th century. Persian by birth, Avicenna invented a coiled pipe which allowed the plant vapor and steam to cool down more effectively than previous distillers that used a straight cooling pipe. Avicenna’s contribution lead to more focus on essential oils and their benefits.

Within the 12th century, an Abbess of Germany named Hildegard grew and distilled lavender for its medicinal properties.

Within the 13th century, the pharmaceutical industry was born. This event encourages great distillation of essential oils.

Natural Aromatics Being BurnedDuring the 14th century, the Black Death hit and killed millions of people. Herbal preparations were used extensively to help fight this terrible killer. It is believed that some perfumers may have avoided the plague by their constant contact with the natural aromatics.

Within the 15th century, more plants were distilled to create essential oils including frankincense, juniper, rose, sage and rosemary. A growth in the amount of books on herbs and their properties also begins later in the century. Paracelcus, an alchemist, medical doctor and radical thinker is credited with coining the term Essence and his studies radically challenged the nature of alchemy and he focused upon using plants as medicines.

During the 16th century, one could begin purchasing oils at an “apothecary,” and many more essential oils were introduced.

During the 16th and 17th centuries, perfume starting being considered an art form, and it was more clearly defined as its own field.

During the 19th century, perfumery remained a propserous industry. Women would have their jeweler create a special bottle to hold their treasured perfume. The 19th century also was important scientifically as major constituents of essential oils became isolated.

Gattefossé is apparently credited with coining the term aromatherapy in 1928 within an article where he supports the use of using essential oils in their whole without breaking them down into their primary constituents. In 1937, Gattefossé wrote a book called Aromathérapie: Les Huiles essentielles hormones végétales that was later translated into English and named Gattefossé’s Aromatherapy. It is still in print and widely read.

Other highly respected 20th century aromatherapists include Jean Valnet, Madam Marguerite Maury, and Robert B. Tisserand. Jean Valnet is most remembered for his work using essential oils to treat injured soldiers during the war and for his book, The Practice of Aromatherapy, originally entitled Aromathérapie in French. Austrian Madam Marguerite Maury is remembered as a biochemist who avidly studied, practiced and taught the use of aromatherapy for primarily cosmetic benefit. Robert B. Tisserand is an English aromatherapist who is responsible for being one of the first individuals to bring knowledge and education of aromatherapy to English speaking nations. He has written books and articles including the highly respected 1977 publication The Art of Aromatherapy. The Art of Aromatherapy was the first aromatherapy book published in English.

Australasian College of Herbal Studies. AT 201 Certificate in Aromatherapy Course Book (version from 1999). Lake Oswego, OR. 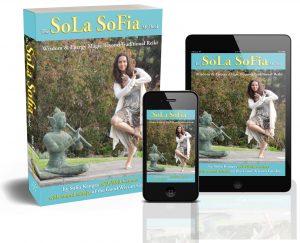 SoLa SoFia MeThod book is Available on Amazon and Kindle! Never has a book on Reiki been so right on target and explain the true essence of energetic healing from a user-friendly and approachable authors.